Ah! How the little ones love to lie: UberVU’s visionary stuff

A policeman stops you on your way home from a party. He asks you if you have been drinking. You put your game face on and say “no”. He is convinced and lets you go. The next day, another policeman, another party, another lie. You get accustomed to lie all the time, and it’s fine, because nobody gets hurt.

Some people can lie with a straight face, even if they don’t have to.

I’ve read this long article about the great success UberVU had, told by Vladimir Oane, and i wonder why lie when you can just ignore some parts. Why tell about the great idea and the great engineering UberVU had when people know that is not true? To fool the young? To boost your credentials?

Back in 2010, two years after their visionary ideas, UberVU was a spammy site that monitored blogs and spammed Google with what they indexed. Here is proof. I called them out, they kept their little pieholes shut, but responded privately they will no longer monitor my blog. They lied and changed the scrapper’s IP after blocking the original one (Zelist does this constantly, they refuse to mention their “top blogs”, a public list of blogs ranked by their own algorithm, is not complete, but still monitor my blog and sells this monitoring service to customers).

So, after 3 years of being just another monitoring service, they were forced by the investors to hire an american CEO, Mark Pascarella, to turn the turd into a viable business and sell it. Which they did in 2014, to Hootsuite, for 15 to 20 millions, as they claim.

Kinda different from what Vladimir Oane says now. So yes, he is the guy who likes to lie for no reason, when he can just shut up. He did good, he created a turd somebody turned into a business and sold it for a profit. Good job! Why not leave the “great idea” and “great success story” for something else? 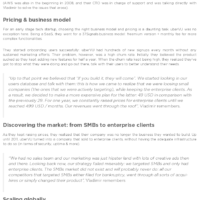